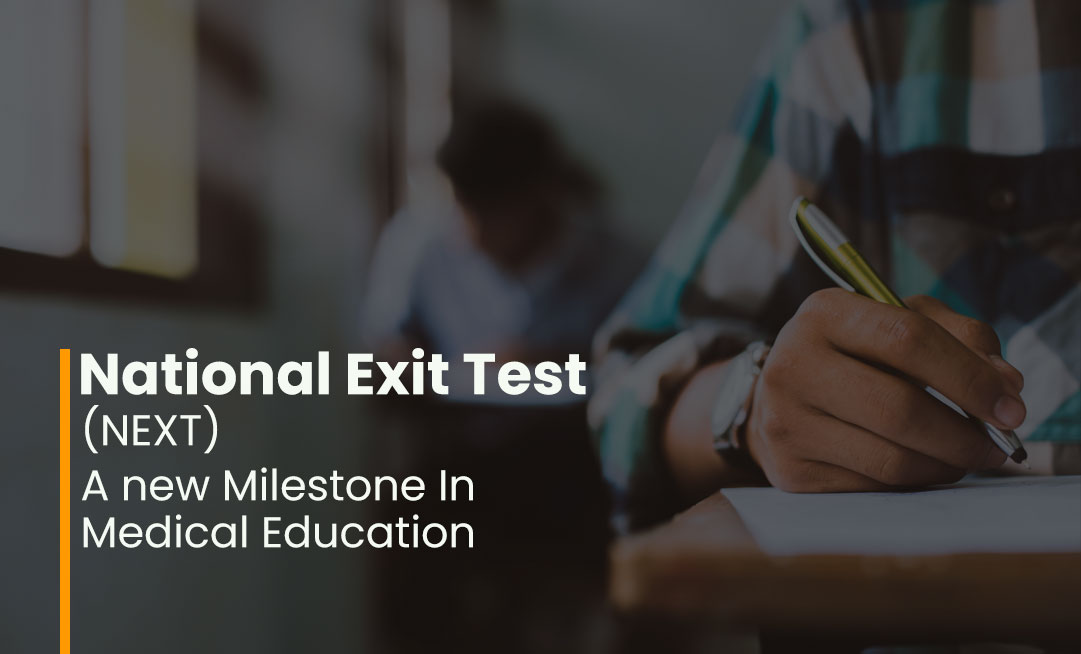 Recently three MBBS students have filed a plea seeking a reduction in the cut-off percentile ascertained by the Medical Council of India to get a seat in medical colleges after clearing the NEET-PG examination. However, the Delhi High Court has informed that they can’t interfere with the cut-off percentile set by the concerned authority as the government is in the process of introducing the NEXT exam. Wondering what is NEXT and its importance? Well, keep reading to explore more about this.

In the year 2019, the Government of India passed the NMC Bill 2019, National Medical Commission Bill. After that, the medical practices, as well as education, witnessed a complete overhaul. Among the changes that have been suggested under the NMC Bill, all the medical students will now be required to take the MBBS exit or NEXT- National Exit Test.

What Do You Mean By NEXT?

After the introduction of the new draft, in the country, there will be just one examination for Foreign medical graduates as well as Indian medical graduates. As per the report, NEXT will replace the NEET PG and FMGE exams as they will be considered the qualifying or final exams for all MBBS students. Besides, NEXT will be a gateway to PG and a licensing test for medical students who are interested in practicing medicine in the country.

Which Batch Will Have To Take The NEXT Exam?

Well, as per the reports, NEXT is just one type of exam for final year MBBS students. If you go through section 49, you can find that there will be no changes in the study pattern for getting a medical degree from universities or institutes. The amendment shows that MBBS students who have beenadmitted in 2020 will have to take the NEXT exam in 2023. If you are one of them, then you should start preparing for this exam now. Well, there is no such restriction related to NEXT attempts. You can appear for NEXT multiple times. However, you will have to undergo the internship.

Some Advantages of NEXT

With the introduction of the NMC, there will be some advantages and disadvantages of the steps. One of the primary aims of the NMC Bill is to enhance the functions and effectively regulate the country’s medical industry. However, here are some benefits of NEXT that you should know about.

Introducing a single screening, licentiate, and exit exam will only allow the MBBS graduates with sufficient theoretical and practical skills to practice in India. But it can be said that the process of achieving uniformity among the doctors can take time.

As a compulsory part of the exam, every MBBS student will have to work for at least three years in tribal and rural settings. Currently, the hospitals and medical facilities in remote areas lack important medical facilities. However, the Government believes that through this exam, the condition of hospitals located in remote areas can be improved.

Earlier, a foreign MBBS student who wished to practice in India was required to appear for an MCI screening test called FMGE. And they used to deal with a lot of paperwork. But now, the process has become much easier for them.

Clear NEXT To Get License To Practice

The National Medical Commission has taken a major step toward creating uniformity in the system by introducing the Draft Regulations of Licenses to Practice Medicine, 2022. And doctors who want the license need to clear the NEXT.

What Has The Ministry Said?

As per a statement released by the Union Health Ministry on 30th July,the government is planning to hold the NEXT during the first half of 2023. But there will be a mock test in 2022. This will help in removing stress and anxiety among the MBBS students.

How is The Exam To Be Held?

The NMC Act, 2019 informs that the exam will be conducted in such a manner as described by the regulations. Besides, it would become fully operational within two to three years.

No comments to show.